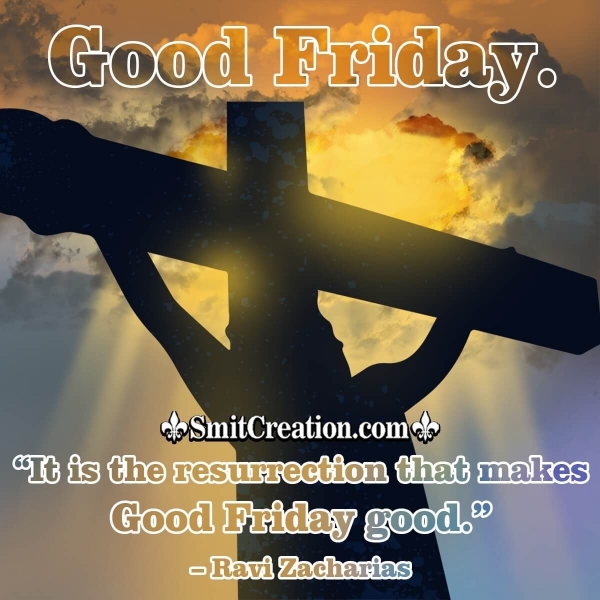 “It is the resurrection that makes Good Friday good.” – Ravi Zacharias

“The Cross! There, and there only though the deist rave, and the atheist, if Earth bears so base a slave; There and there only, is the power to save.” – William Cowper

“Unless there is a Good Friday in your life, there can be no Easter Sunday.” – Fulton J. Sheen

“Practice mercy and forgiveness throughout as a lesson that symbolizes the love shown through his crucifixion.” – Unarine Ramaru

“Christ has not only spoken to us by his life but has also spoken for us by his death.” – Soren Kierkegaard

“The cross was two pieces of dead wood; and a helpless, unresisting Man was nailed to it; yet it was mightier than the world, and triumphed, and will ever triumph over it.” – Augustus William Hare

“Good Friday is all about:- Family, Friends, Fish and Faith. So celebrate today.” – Anthony T. Hincks

“Holy Week is a good occasion to go to confession and to take up the right path again.” – Pope Francis

“By the cross we, too, are crucified with Christ; but alive in Christ. We are no more rebels, but servants; no more servants, but sons! – Frederic Farrar

“On the eve of the cross, Jesus made his decision. He would rather go to hell for you than go to heaven without you.” – Max Lucado

“The Cross was the manifestation of Divine love without reserve or limit, but it was also the expression of man’s unutterable malignity.” – Sir Robert Anderson

“He himself bore our sins” in his body on the cross, so that we might die to sins and live for righteousness; “by his wounds, you have been healed.” – 1 Peter 2:24

“The word “Christianity” is already a misunderstanding – in reality, there has been only one Christian, and he died on the Cross.” – Friedrich Nietzsche