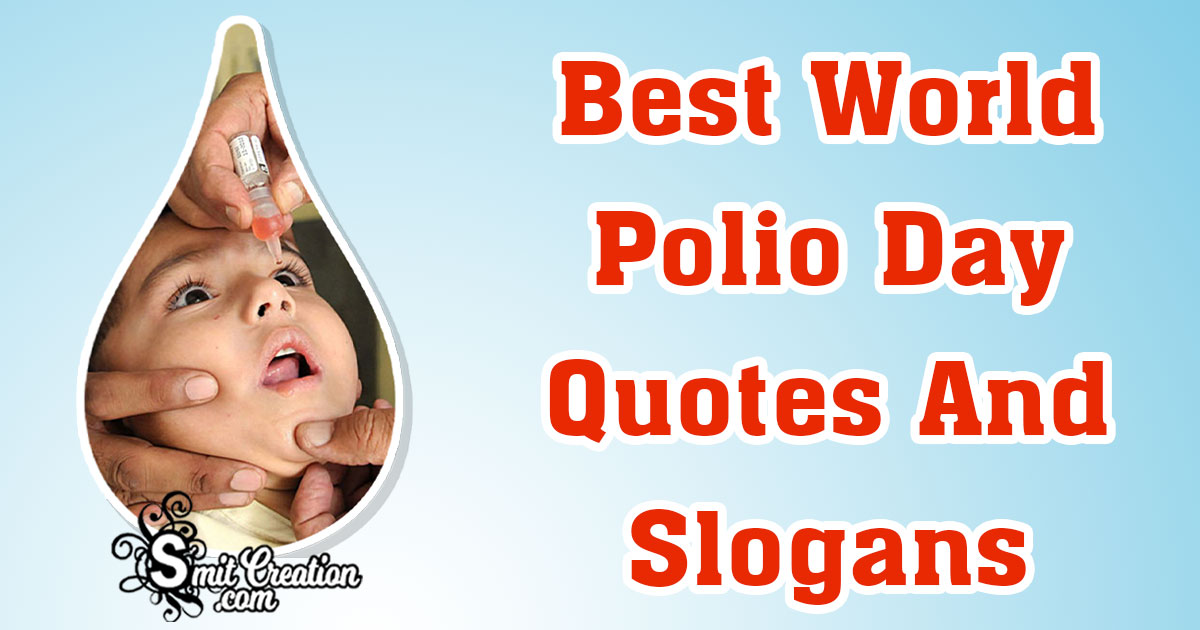 “Wishing a very Happy World Polio Day to you….
Together we can make this world polio free for the generations to come.”

“With each drop of polio, we are coming closer to the day when this world will be free from polio…. Wishing a very Happy World Polio Day.”

“We cannot do easy with polio because it has already taken many lives and already given many people a lot of pain…. Its time to bid it adieu…. Happy World Polio Day.”

“Warm wishes to every one World Polio Day…. The onus of making this world polio free lies on the shoulder of each one of us and we must do it.”

Save the child, don’t forget to give him the vaccine.

A drop can do many wonders.

One drop can save many lives.

Let us work together for a polio free tomorrow.

Polio demands our patience and our dedication.

Fight polio, for a better tomorrow.

Life is too precious…. Don’t polio destroy it.

Care for health of your children… Save them from polio.

Don’t miss even a single drop… Save your child from polio.

Let us kick polio out of this world.

Don’t give up on the fight against polio.

Polio is a threat to all of us… Kill it.

Let us fight against polio together.

Polio is making the generations crippled.

Just with a drop, we can stop polio.

Save the children, don’t forget to vaccinate.

A drop of pulse polio can change the future.

Polio can be prevented. Wake up.

One drop of polio can save your child.

Together we have to fight against polio.

Let us kick out polio from our lives.

One drop of polio pulse can change everything.

If you love your child then you cannot miss on pulse polio.

Don’t let polio decide the future of your child.

If you don’t vaccinate your children now, you will regret later.

Polio must be stopped.

Missing on pulse polio is missing on an opportunity for a better life.

Prevention from polio is its cure.

Life with polio is full of challenges.

Wake up to polio now!!

Check The Mail And Confirm Your Subscription