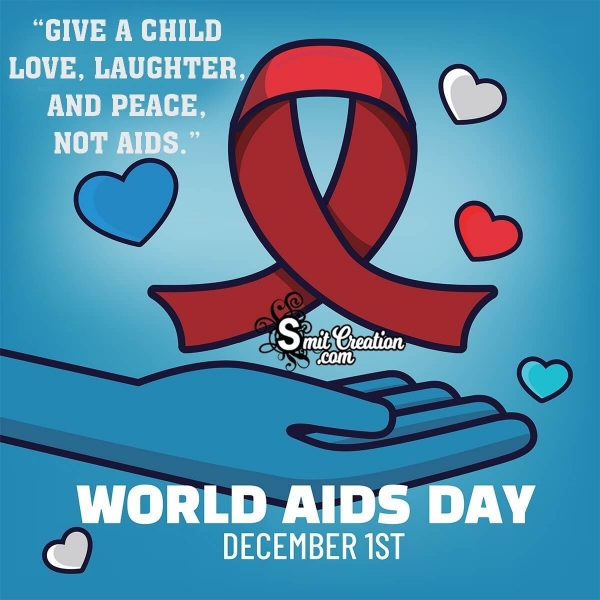 “Give a child love, laughter, and peace, not AIDS.” – Nelson Mandela

“I’m a firm believer that education is the most efficient tool we have to make people aware and make our children aware, and to protect them from the scourge of the century, which is AIDS.” – Shakira

Let us remember all those who have died as a result of AIDS and learn to be compassionate and empathetic to those who are still alive. Make them feel valued.

The first step is to raise awareness, and the second is to advocate for equal rights. The most important step is to show sympathy to Aids patients.

“I want to make it fashionable to have safe sex. You must be safe. You can have sex with hundreds of people with a condom on and get nothing. If you have sex without one, then you could get all sorts of problems.” – Lady Gaga

“The fight against HIV/AIDS requires leadership from all parts of government — and it needs to go right to the top. AIDS is far more than a health crisis. It is a threat to development itself.” – Kofi Annan

“No one can lead our lives for us. We are responsible for our actions. So people—especially the younger generation need to be very careful especially where safe sex is concerned.” – Salman Ahmad

“Some say that AIDS came from the monkeys, and I doubt that because we have been living with monkeys from time immemorial, others say it was a curse from God, but I say it cannot be that.” – Wangari Maathai

“It is bad enough that people are dying of AIDS, but no one should die of ignorance.” – Elizabeth Taylor

“HIV does not make people dangerous to know, so you can shake their hands and give them a hug: Heaven knows they need it.” – Princess Diana

“To me, AIDS is an international epidemic and every country can be affected by it. Therefore, it can be discussed on an international level. Unfortunately, AIDS doesn’t require a visa.” – Abbas Kiarostami

“We live in a completely interdependent world, which simply means we cannot escape each other. How we respond to AIDS depends, in part, on whether we understand this interdependence. It is not someone else’s problem. This is everybody’s problem.” – Bill Clinton

“I had a calling inside of me. I had a sense that when I was going through experiences like living on the streets, losing my parents to AIDS, just having my whole world turned upside-down, there was this feeling inside of me like I was meant for something greater.” – Liz Murray

“AIDS is an absolutely tragic disease. The argument about AIDS’ being some kind of divine retribution is crap.” – Calvin Klein

“The heart of the security agenda is protecting lives — and we now know that the number of people who will die of AIDS in the first decade of the 21st century will rival the number that died in all the wars in all the decades of the 20th century.” – Al Gore

“My play safe sex was picked apart because critics thought it was untrue. It was a play in which no one had AIDS, but the characters talked about how it was going to change their lives.” – Harvey Fierstein

“I wanted to work for someone who truly believes that in our lifetime we’re gonna find a cure for this. I believe that as sure as I’m sitting here, we’ll find a vaccine.” – Cheyenne Jackson

“I lost relatives to Aids, a couple of my closest cousins. I lost friends to Aids, high-school friends who never even made it to their 21st birthdays in the ’80s. When it’s that close to you, you can’t really deny it, and you can’t run from it.” – Queen Latifa